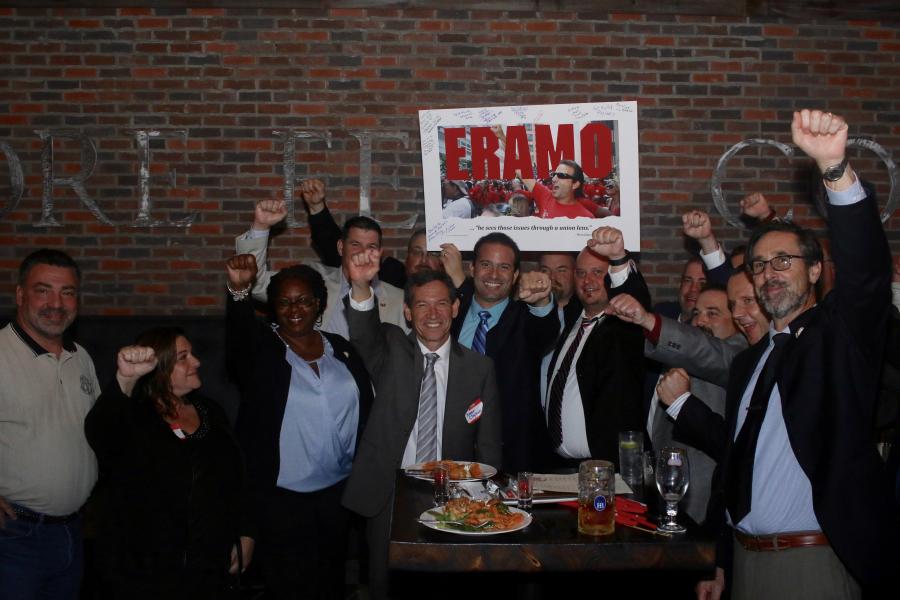 In what is a first of a many, UCOMM Media Group put together a fundraiser for our good friend Anthony Eramo, a rank & file union leader with the Communications Workers of America (CWA). "I have known Anthony for years. We met in 2003 and have been fighting the good fight together ever since," says Kris LaGrange. He is one of our own, a two-term Long Beach City Councilman and now he is heading up to Albany to be AD 20's New York State Assemblyman. The least we could do is ask a few UCOMM Clients to make some PAC donations so he can carry the pro-working family message to the NYS state capital.

It wasn't a tough sell to our Long Island clients, even our clients across New York State came through with some support. Anthony is an activist, has manned and organized picket lines and rallies for almost every union cause you could think of. Having been on strike against Verizon numerous times, walking picket lines is not new to Eramo. "I have stood with Anthony at Occupy Wall Street, rallies to support the Affordable Care Act, rallies against the Trans-Pacific Partnership, and almost every action organized by the Building Trades and the AFL-CIO. Eramo is one of us, he's Labor's son. I am proud of him," adds LaGrange.

Many UCOMM Clients already maxed out their support for Eramo's Assembly run including CWA Local 1104, CWA Local 1109, and Laborers Local 66. Those clients were invited to the fundraiser anyway to eat and drink on us. In a way the FUNdraiser was also a party for UCOMM Clients, another good excuse for us to mingle, dine and celebrate all that we work hard on and accomplish together. The clients that came out to support Eramo were the Long Island Federation of Labor, AFL-CIO, International Brotherhood of Electrical Workers (IBEW) Local 1049, the Plainedge Federation of Teachers, Laborers Local 66 and a few other friends from the organized labor community. Also in attendance was UCOMM's full staff.

Not all UCOMM Clients and associates could attend, IBEW Local 1249 based in Syracuse and IBEW Local 10 based in Binghamton mailed in their support as did lobbyist Glen Casey from Casey Strategic Relations in Albany. In years past, both Casey and Eramo worked on passing the Telecom Call Center Bill and Pay Bill for SUNY Graduate Students together. Levittown United Teachers also mailed in their support.

The fundraiser was not held at a catering facility, but at a busy bar and restaurant in downtown Bay Shore, New York, conveniently located across the street from UCOMM's office. Roger Clayman, the Executive Director of the 300,000 strong Long Island Federation of Labor, AFL-CIO introduced Eramo with some brief remarks. Speaking over the loud boisterous bar in an arena-style setting, Clayman said that Eramo is one of us, we know him and there is no guessing on what we get by sending Anthony up to Albany. When it was Eramo's turn to speak, he thanked the old friends and the new friends for coming out calling the group who came out a brotherhood and sisterhood, a large extended family.

UCOMM took the liberty to print and design a graphic of a picture we took of Anthony at the Verizon contract negotiations rally back in July 2014.

The background on the quote used in the graphic is comical because Eramo is wearing sunglasses, so we printed a quote from Newsday where the Editorial Board said Eramo would not be the best candidate because ..he sees those issues through a union lens. The Editorial Board went on to comment that his union background is a problem because he is against the tax cap. In New York state, the 2% tax cap cripples school districts' ability to grow and effectively service the students, a common sentiment shared by educators across New York State. The tax cap has to go, and we hope that Eramo can help push that in Albany as a member of the State Assembly.

This fundraiser was novel and unique, quickly thrown together to get behind a true friend of the working people's movement. A proud moment for UCOMM, a fun night for the clients, and financial success for the Eramo campaign. It was nice chatting with Eramo the morning after, Eramo is good people and Albany needs more lawmakers like him.